The Weekend In Football: On The Flip Of A Coin 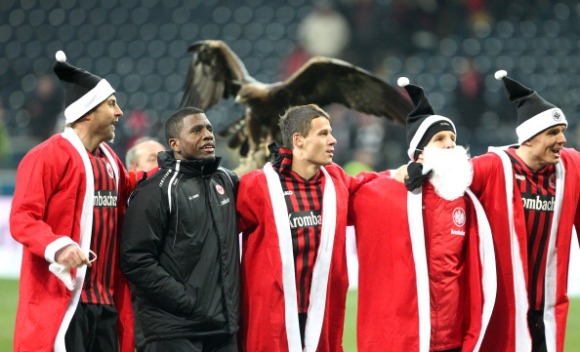 Thankfully, Attila is not nesting at the moment. That beard may have proved a problem if he had been. Image: DANIEL ROLAND/AFP/Getty Images.

If you’re in a bad mood today, we suggest that instead of reading the Premier League section of this post, you should stare at the photo of Eintracht Frankfurt and their mascot above until you remember how much fun football can be when everyone behaves themselves.

You can then proceed directly to Lionel Messi’s happy place, unhindered by negative energy and a desire to start watching rugby.

Careful. You might blind him from that distance. Image: David Price/Arsenal FC via Getty Images.

It took several jugs of lukewarm coffee, two nips from a secretly stashed hipflask and a threatening email from the Editor before we felt brave enough to delve into the events of the Premier League this morning.

It should have been a weekend of celebration and merriment for the neutral follower. Fernando Torres’ resurgence under Rafa Benitez actually seems to be happening, a striker-less Liverpool scored three at West Ham, Arsenal won, Spurs conceded two in stoppage time and lost to Everton and Mario Balotelli found yet another way to piss off Roberto Mancini.

Any vicarious pleasure we may have derived from any or all of the above is but a vague memory this morning, as we trudge through the lurid newspaper headlines that are becoming traditional accompaniments to any Premier League weekender – allegations of racial abuse, crowd twattery, pitch invaders in stupid hats and diving.

Suffice to say, given all the criticism Manchester City have received for chucking money around in the last few years, it’s somewhat ironic that their hopes of retaining the title should be ruined by one idiot with a coin.

Having made a miraculous recovery from an alarmingly florid injury in Barcelona’s Champions League midweek fixture, Lionel Messi reasserted his embarrassing dominance over football by breaking Gerd Muller’s record for the most goals in a calendar year on Sunday. The three time Balon D’Or winner scored his 85th & 86th goals of 2012 vs. Real Betis, surpassing the forty year old tally and maintaining Barca’s six point lead at the top of the Primera Division.

Two is mere chicken feed to the likes of Radamel Falcao, though. The Atletico Madrid striker scored five in his side’s 6-0 annihilation of Deportivo La Coruna – a haul that was sure to win the plaudits on any other weekend, but he’ll have to be satisfied with second place and the knowledge of a job well done. Messi’s usual understudy, Cristiano Ronaldo, failed to score in Real Madrid’s 3-2 thriller against Valladolid, but Los Blancos won anyway, courtesy of Mesut Ozil.

After his assist for the opening goal, Panagiotis Tachtsidis mistook the mic fuzzy for a small, friendly animal and stopped for a chat. No one had the heart to tell him. Paolo Bruno/Getty Images.

Francesco Totti scored two and set one up for Pablo Osvaldo in Roma’s 4-2 defeat of Fiorentina, consolidating his side’s bid for a  Champions League spot. While always competitive, the battle for the top three slots is opening up nicely as the winter break approaches, with Inter snatching second spot after beating Napoli 2-1 and Lazio, Fiorentina plus the aforementioned Roma queuing up to take advantage of any slip.

There’s also the small matter of AC Milan, who may be floundering about in the unfamiliar environs of mid-table right now, but appear to have steadied the ship after a run of decent results. They beat Torino 4-2 away at the weekend, and you’d be a fool or an Inter-blinkered optimist to rule them out of the title race, even at this stage. 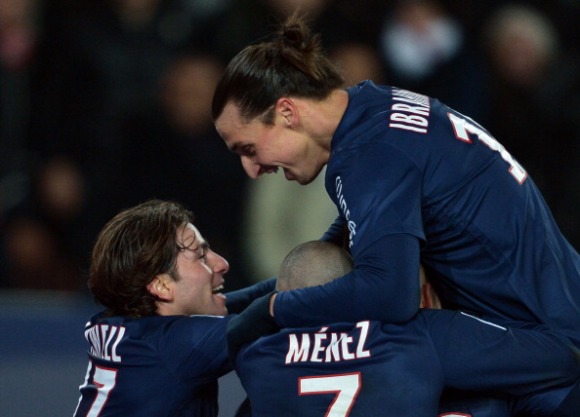 Big Zlatan scored one and laid one on for fellow tattoo traumatiser Ezequiel Lavezzi in PSG’s 4-0 rout of promoted Evian. The Ligue 1 money boys are now second only to Lyon in the table, who beat St Etienne despite losing Mouhamadou Dabo to a straight red. His chest butt on Max Gradel has been described as ‘Zidane-esque’, but bore neither the premeditation nor the malice of it’s iconic predecessor.

Bottom feeders Troyes and Nancy both started the weekend with one win all season and finished with one win all season, only managing 1-1 draws vs. Nice and Valenciennes respectively. Last season’s champions Montpellier did manage to get all three points, beating Ajaccio 3-0, but remain in twelfth place after a poor start.  Goal difference is currently the only thing keeping Ajaccio out of the relegation zone.