Robert Lewandowski learned what it was like to have the personal attention of Real Madrid’s record red card earner last night. Image: DANI POZO/AFP/Getty Images.

In the end, of course, it all came down to Sergio Ramos. Jose Mourinho’s musing on the fact that Robert Lewandowski scored four goals in the first leg and yet was not fouled once was obviously taken to heart by the Real Madrid central defender, whose constant clattering, elbowing and bullying of the Polish international was sufficient for him to lose his composure in front of goal.

It’s a testament to Lewandowski’s focus and professionalism that he accepted the majority of the attention without complaint, despite ample opportunity to bitch to referee Howard Webb, and, amid rumours of his departure, it’s difficult not to feel like the Champions League trophy is his idea of a perfect parting gift to the club that gave him his breakthrough. 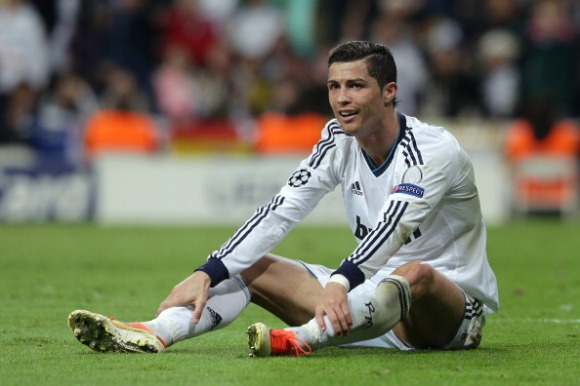 It was a game of missed chances for both sides, culminating in a frantic final ten minutes during which Karim Benzema and Ramos netted two of the three goals necessary to take them through to the final. Mesut Ozil, Gonzalo Higuain and Cristiano Ronaldo all had early chances to score that goal, but were unable to convert, a fact that will no doubt haunt them, at least until the group stages kick off and the whole thing starts again.

It’s hard to blame Cristiano though. He’s had a tough time too lately – what with those rumours of thigh strains and swollen gluts  following him about over the weekend, to the point where he was distracted enough to appear on the pitch at the Bernabeu with two hairstyles instead of the more traditional one per half. The faux hawk/combover combo, while as aesthetically pleasing as most things are on him (since he had his teeth fixed, at least) did not help and his goal in the first leg, while a lifeline at the time, was the only one he was destined to score in the tie.

Meanwhile, on the bench, the battle for Iker Casillas’ soul rages on. The keeper, whose struggle to regain his place in the Madrid starting eleven has sparked rumours of a rift with Mourinho, looked torn as his replacement Diego Lopez produced a stunning save to keep his side in the game. He’s a Madrid man through and through so La Decima is his dream, but on the other hand, would he want his team to win it while he’s bench bound?

Mourinho is set to leave at the end of the season, so it’s possible that by the time the group stages roll around again, Casillas’ position as No.1 and captain will have been restored and the only thing standing in the way of him lifting Real Madrid’s tenth European trophy will be those pesky Germans.

Hmm. No wonder he looks so depressed.