WWC Round Up: Quantum Football

A week or so ago I wrote a guide to getting into the Women’s World Cup for Prospect magazine. A lot has changed since the tournament kicked off and as I’m claiming responsibility for the spike in Panini sticker album sales, it aso falls to me to point out that some of our number are being a bit selfish and inconsiderate in their enjoyment.

Please take a moment to read this primer to ensure that your behaviour cannot be miscontrued as bullying, coercion, taking the piss or god forbid, enjoying yourself.

#1 – Be Considerate & Thoughtful With Your Merriment

Media coverage of this competition is unprecendented. As we know, the Pauli exclusion principle states that two objects cannot occupy the same space at the same time, so the existence of France 2019 means that all men’s football is cancelled until further notice. No more Premier League (apart from the fixtures being released yesterday), no more expensive showboaty transfers (apart from Eden Hazard’s £89m transfer to Real Madrid) and no proper games to watch (apart from the Euro 2020 qualifiers which have been on all week). This is likely to come as a shock to people who have got used to men’s football on tap, and it falls to us to bear this in mind while we celebrate our hard fought domination.

Mahatma Gandhi once said ‘The greatness of a nation can be judged by the way its fans of ‘mens’ football are treated,’ and I accept that I have forgotten my manners while basking in the sensation of watching actual women play actual sport. Age may have lent me a rose tinted filter here, but I wasn’t offered football at school, never saw a woman playing it and didn’t have the self-confidence to push myself forward and play with the boys. I realise now, of course, that this was entirely my own fault and just because boys have seen themselves represented in sports heroes throughout recent history, I should still be respectful when I experience the sensation for myself.

This will only become more important as we move into a clear position of power. It’s our duty to be humble and remember not to marginalise other people’s feelings. Research shows that the sight and sound of women playing professional sport can be immensely triggering for the more emotional members of our society, whose voices and feelings are a valid as ours.

It’s not hard to be more considerate. If you want to watch the game at home, ask around to see if everyone’s ok with that. Perhaps give anyone who’s unsure a timeout to think about it. Not everybody wants to see women pretending to play a sport they’re patently underqualified to play. 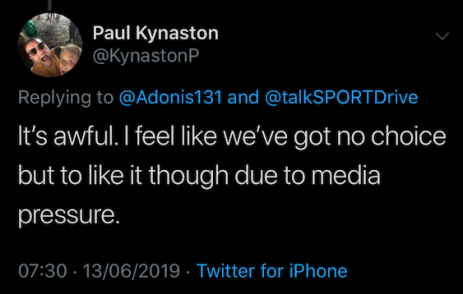 If you’re a broadcaster, consider hiding all the games behind the red button so people can opt in or opt out. Consent is key here. If you’re not sure, obtain explicit consent at every opportunity to ensure everyone is comfortable.

If you’re talking about the game in the pub or indeed on the telly, try to lower your voice a few octaves so as not to startle people. In 2007, Match of the Day’s Jacqui Oatley was allowed to commentate on a game which was then broadcast on BBC1 with no warning. Scientific research has shown that women’s voices are capable of being up to 250HZ higher than men’s, meaning there’s a good chance you could deafen someone by leaning across to ask them the offside rule.

Finally, change your name to Clive or Andy. Ease them in.

So this is the women’s football you want equal pay for? pic.twitter.com/9gSAtb2RrO

If you’re a player, there’s a chance people won’t have seen you before. You’re at a World Cup, not pissing about down the rec with your brother’s mates who are only letting you play because you threatened to tell your mum on him. Don’t even bother turning up if you haven’t learned the offside rule properly, how to kick a ball, where to kick it when and other useful tekkers. Elite men’s clubs don’t spend millions a year on players, wages, provision for elite training methods, logistical and medical support to improve their competitive chances so why would women’s football need the same infrastructure to be in place for several decades before they can even hope to compete on a level playing field?

In short, if you a do a throw in like this, it’s not unreasonable for people to demand cancellation of the entire sport and possibly call for it to be expunged from history.

This might seem obvious but if you’re not crap, do please try to keep a lid on it. The US Women’s National Team (USWNT) celebrated their 13-0 victory over Thailand in the most shameful way possible and it’s been reassuring to see them so swiftly corrected by virtually everyone who saw the atrocity unfold in real time.

To be clear, the World Cup is not the appropriate platform for making a point to your governing body about equal pay, even if you are only earning “38% of what similarly situated male players earn and claim to be subjected to substantially inferior playing, training and travel conditions.”

Don’t celebrate any goals after an arbitrary number they’ll come up with after the game. Let’s say nine, because that’s the goal scored by Megan Rapinoe. Rapinoe might think she’s entitled to a leg flap and a shouty hug because she’s suffered three ACL injuries during her career, has been a stalwart in the USWNT since 2011 and might not play another World Cup because she’s thirty-three.

You’d think she’d have got the memo after taking a knee in support of Colin Kaepernick.

You can’t really be held responsible for your own lack of self-control. It’s a societal thing. The best thing about women’s football is that if you do get a bit carried away, someone will pop up almost immediately to remind you that you or someone you love has a vagina and so do all the players at France 2019.

This week’s guest publication is Charlie Hebdo, who took time out from their hectic schedule of baiting minority groups to take a swipe at 51.6% of French people with this witty cartoon and the brilliant caption ‘We will eat for a month!’

You see how close we came to forgetting our place? Unkind people might call that gag hackneyed, tired, tedious and a bit fucking embarrassing for a publication that fancies itself to be at the cutting edge of satire, but I’m super glad of the reminder that when it comes down to it, I’m just hosting genitalia that perform a biological function.