The Weekend In Football: Born Of Frustration

Having seen what happened to Cristiano a couple of weeks ago, Angel Di Maria is taking no chances. Denis Doyle/Getty Images Europe.

This week’s results post is less of a round-up and more of a sit-com.

Settle back, relax and have a six pack and a cloth handy.  This could get messy. 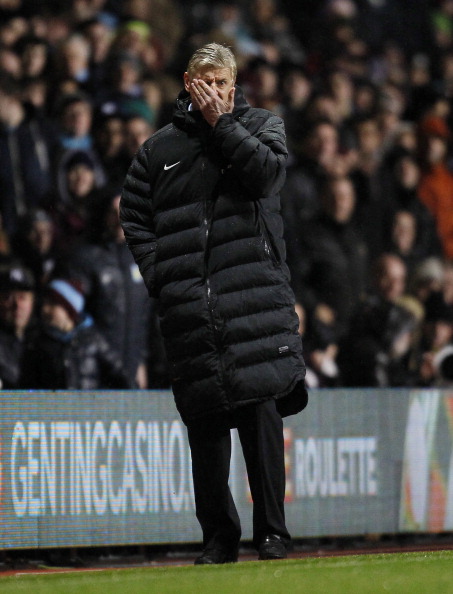 The smell of fear? Not inside that duvet coat it’s not. Image: IAN KINGTON/AFP/Getty Images.

With statue and legacy firmly in place, it’s unlikely that Sir Alex Ferguson’s tenure at Manchester United is going to end with an abrupt sacking, but we’re not ruling anything out in the current climate. While Mark Hughes ejection from the comfy seat in the QPR dugout was an inevitability given the club’s record this season, Roberto Di Matteo’s departure from Stamford Bridge has blown a big hole in the belief that managers have to be crap for at least a short while before being shown the door.

Ironically, Di Matteo’s successor is unlikely to be the first victim of this madcap precedent. Rafa Benitez hadn’t been in the Chelsea hotseat for more than fifteen seconds before fans were showing their antipathy towards him, brandishing their homemade A4 printouts furiously each time a Sky camera panned in their general direction during Chelsea’s 0-0 draw vs. Manchester City. If Roman Abramovich isn’t swayed by the weight of a Champions League trophy, he’s unlikely to reconsider a decision on the basis of a few bits of paper.

Thank goodness not everybody is impervious to ire. Arsenal’s 0-0 draw vs. Aston Villa prompted cries of “You don’t know what you’re doing” from fans, a dig too far for Arsene Wenger, who got his duvet coat in a feisty flap during the post match press conference. “How many games have you managed?” he asked, presumably rhetorically. “I promise you if you manage one I will sit in the stands and chant ‘you know what you are doing.”

We would LOVE IT if he did that. LOVE it.

The only person likely to benefit from all this is Spurs’ manager Andre Villas-Boas. His record at Chelsea has been the stick with which the press and a few Spurs fans have happily beaten him with, but recent events at Stamford Bridge imply that the pressure he was working under may have played a bigger role in his downfall than we thought. He led Spurs to a 3-1 home victory against West Ham, a victory that was marred by alleged anti-semitic abuse from West Ham fans which is set to be investigated by the FA. Will the Ginger Ninja and his club ever catch a break?

Among the other football games that broke out among the controversy, Southampton surprised Newcastle with a 2-0 win, Swansea and Liverpool played out a goalless draw and Jordi Gomez scored a hat-trick in Wigan’s 3-2 home victory over Reading.

Whenever a dark shadow is pursuing a floundering manager through deep water, you know that somewhere on the surface, Jose Mourinho will be sitting aboard his luxury yacht, chucking chum into the water like a manscaped version of Quint from Jaws.

Roberto Mancini was the lucky recipient of a faceful of bloody fish from The Special One this week, but while Mou was gallivanting around Europe with his bucket he forgot to leave instructions for his side’s game vs. Real Betis and they lost 1-0. Barcelona won their game vs. Levante 4-0, leaving Los Blancos eleven points off the top – a seemingly insurmountable lead.

Not to worry. Rumour has it that Mourinho looking for a bigger boat. Or at least a more expensive one.

In other, more land based news, both Sevilla and Valencia from Atletico Madrid and Malaga respectively. Athletic Bilbao drew 1-1 with Deportivo La Coruna and Espanyol remain in bother at the bottom after a 2-0 defeat to Getafe.