This is called ‘making a case for the starting line-up’. Image: Michael Regan/Getty Images Europe.

Just a few weeks in, and our habit of kicking off a results round-up with news of our betting adventures has become old and mildly embarrassing. Suffice to say, this week’s debacle involved Saturday’s late kick-off at Villa Park, Villa taking an uncharacteristic 2-0 lead and the SideEye correspondent who was supposed to be watching it taking an ill-timed nap. By the time said correspondent woke up, Chicharito had scored two and a half goals, claimed the match ball and Manchester United had taken what turned out to be an unassailable lead at the top of the table.

Things we did stay awake for included Arsenal’s 3-3 draw against Fulham. It may be a little early to start using the word catastrophic in relation to the Gunners’ start to the season, especially when Fulham’s frontline now boasts the languid yet lusty firepower of Dimitar Berbatov, but the Arsenal side’s continuing failure to play as a cohesive unit for any length of time must be playing merry hell with Arsene’s worry lines. Expensive surgery in January may be his only option.

For Mark Hughes, seventh place in the table and a decent chance of qualifying for the knock out stages of the Champions League are must seem like so many first world problems. QPR lost at Stoke City on Saturday- their seventh defeat in eleven games – and if Southampton and Reading weren’t being so obliging with their results, they’d be adrift and floating purposefully towards the dubious honour of lowest points tally in a Premier League season.

Derby County, are you listening? 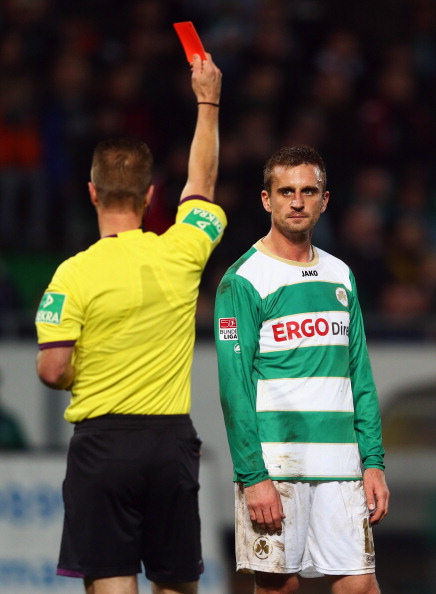 That’s fine, Ref, but by the looks of things, Milorad Pekovic of Greuther Fuerth is going to even things up by having your firstborn for a mid-morning snack. Image: Alex Grimm/Bongarts/Getty Images.

Bundesliga neutrals had several reasons to hope for a surprise result in Bayern Munich’s game vs. Eintracht Frankfurt on Saturday. Frankfurt, whose habit of pinging between the top flight and Bundesliga 2 made them look a little West Brom-ish at times, have, like their West Midlands counterparts, put on a storming show this season and were third before kick-off. If their moment was ever going come, where better than in front of 71,000 fans at the Allianz Arena?

Their valiant efforts were no match for a Bayern side intent on putting as much distance between themselves and champions Dortmund, though. The game ended 2-0 with goals from Ribery and Alaba, and Bayern are now seven points clear of closest rivals Schalke, who beat Werder Bremen 2-1. Frankfurt are one point clear of Dortmund, who beat serial relegation botherers Augsburg 3-1.

Note to defenders: Half blinding him does not stop him scoring. Back to the drawing board. Image: Manuel Queimadelos Alonso/Getty Images.

Project Next-Gen is now in full effect in La Liga, although unless the Spanish FA make some serious rule changes in the next twenty years, it’s unlikely that Cesc Fabregas’ progeny will be contributing on the pitch. A week after Thiago Messi was born and issued an optimistic membership card by Daddy’s former club, news breaks that Cesc Fabregas’ partner is expecting a daughter. There’s always hope that the RFEF might become progressive enough in the next twenty years to allow mixed teams (heaven knows, with those genes she’ll probably be talented enough) but honestly? Don’t hold your collective breath.

Of course, we could have just ignored those two completely and talked about Athletic Bilbao’s vital 2-1 win over Sevilla, Rayo Vallecano’s mad twenty-three second half minutes, during which they overturned a 2-0 deficit against Celta Vigo to win the match 3-2 or even Atletico Madrid’s continuing success at the top of the table, but you know what? If we don’t mention Real Madrid or Barcelona in these results posts, our hit rate drops.

It’s your fault, in other words.

With records being shattered all over Serie A last week, Juventus responded by trouncing an unfortunate Pescara 6-1 in front of their own fans and re-opening the gap at the top of the table. Last week’s shock defeat to Inter was but a distant memory, not least to the Nerazzurri, who had their own unbeaten record broken by Atalanta in a game that finished 3-1.

Less shocking (at least contextually) was AC Milan’s 3-1 defeat to Fiorentina. Milan beat Chievo 5-1 last week, but before fans could get too hopeful that Massimiliano Allegri had finally figured out how to shore up the gaps left by Thiago Silva and Big Zlatan, they dropped two points – Alexandre Pato’s missed penalty cited as a contributing factor. What will be worrying fans even more at this point is the possibility of the players who are firing having their heads turned by more successful European clubs in the January transfer window.

In the Premier League alone, we can think of one or two who would walk over hot coals for a striker of Stephan El Shaarawy’s calibre.

Although probably not his hairdo.