Is it possible that Jose Mourinho has engineered Real Madrid’s eight point deficit to Barcelona, just so he can overhaul it and get one over on Pep Guardiola?

At this stage, we’re not putting anything past him. Including the repeated use of bovine torture devices.

This didn’t help. But replays that Mark Clattenburg did not have access to at the time showed contact. Anyone reckon they could have done a better job, under those circumstances? Image: Michael Regan/Getty Images Europe.

The good news? At times, there was a pretty decent football match going on amid the chaos & mayhem at Stamford Bridge yesterday. The bad news? If you weren’t actually watching it, you would have absolutely no idea.

Two early, and barnstorming goals from Manchester United. David De Gea’s sometimes spectacular, occasionally mystifying saves. Eden Hazard reducing the United midfield to spaghetti-legged Grobbelaar impersonators with his startling low centre of gravity. All of the above happened, but once again, allegations of racism, diving and crap refereeing dominate the headlines.

We can’t be arsed to get into the rights and wrongs of it all. But continually blaming officials for failing to spot when they’re being duped by professional players in high stakes matches is clearly the way forward for the game. Congrats all!

In cheerier, slightly less sarcastic news, smash n’grab was the order of the day in the Premier League. Newcastle United, Arsenal, Reading and Fulham all scored in the dying minutes of their games to pick up valuable points, while Liverpool’s luck continued to evade them – Luis Suarez’ derby winner was incorrectly ruled out for offside. 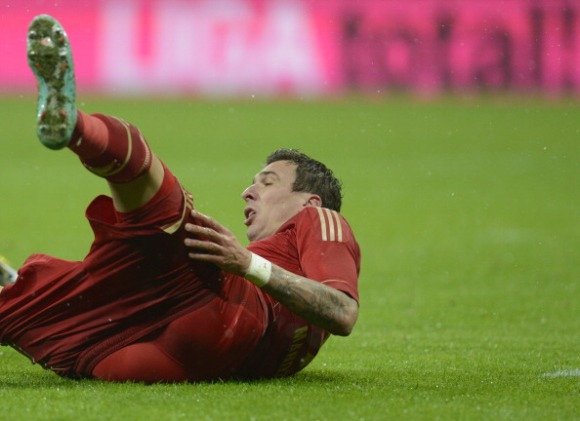 Base layers under shorts. The case for. Image: AFP PHOTO / CHRISTOF STACHE.

Schalke’s 1-0 win over Nurnburg this weekend brought them to within snapping distance of Bayern Munich, after the league leaders’ unbeaten record went for a burton at home to Bayer Leverkusen. Leverkusen led for most of the game, until Mario Mandzukic’s equaliser on 77′ offered a confident Bayern a glimpse of a ninth straight win. It was not to be though, and the magnificently monikered Sidney Sam scored the winner for Leverkusen, propelling them into fifth. They’re now level on points with Champions Borussia Dortmund, who evened their wobbly run some with a 2-0 defeat of SC Freiburg.

This week’s Bundesliga mad props must go to auto correct antagonising Borussia Monchengladbach, who waited until they were 2-0 down away at Hannover with twenty minutes to go, before launching any kind of meaningful offensive. They ended up winning the game 3-2, and Juan Arango was most definitely not offside when he scored the winner.

Love him or hate him, Jose Mourinho has to be one of the few managers in the world who could watch his team’s league rivals thrash their opponents 5-0 on Saturday, then motivate what is claimed to be a rapidly unraveling squad to a similar scoreline on Sunday. Exactly how he manages the huge egos known to stalk the Real Madrid dressing room to such great effect remains a secret, but here at SideEye we figure it involves positive/negative reinforcement using electric cattle prods and tanning oil. Whatever he’s doing, it works and Roberto Mancini might want consider placing a call.

Atletico Madrid are still making hay while the sun shines on the Estadio Vicente Calderón; their 3-1 win over Osasuna kept them level on points with Barcelona and eight clear of Real. Radamal Falcao scored his tenth goal in eight games this season, emphasising the necessity for manager Diego Simeone to hang onto him in the January transfer window. Considering that everyone and their cousin Abner is reportedly plotting a move for the striker, this may be easier said than done.

Like Stephan El Shaarawy’s hair, AC Milan’s fortunes in the league would have probably reached tipping point at the weekend if Genoa had left the San Siro victorious. As he has done so many times this season though, the Sonic the Hedgehog-inspired Italian international saved the Rossoneri’s blushes with a vital winner, although whether it will provide enough stability to keep Massimiliano Allegri in work remains to be seen. Perhaps he should think about applying more product?

Juventus remain top after beating Catania 1-0, while Napoli kept within three points of the Champions after beating Chievo by the same margin. Roma could have forced their way into the Europa League spots with a home victory over Udinese, but despite going 2-0 up after twenty-five minutes, Udinese still came out on top. Veteren striker Antonio Di Natale got two in the 3-2 win, including an 88th minute winning penalty.

Siena and Palermo saw out a 0-0 draw which did nothing for their standing – they are currently bottom and eighteenth respectively.