The Weekend In Football: Just Dance

Feeling festive? Why not grab a partner and have a little shimmy? Image: John Peters/Man Utd via Getty Images.

No, we haven’t got a clue what they’re doing either. But it seemed as good a photo as any to kick off the proceedings.

Sir Alex Ferguson’s Twinkle-Toed All Stars collected three points against Sunderland at Old Trafford on Saturday, restoring the six point gap between the Manchester clubs that had closed to just three after City’s early kick-off against Newcastle United. Both games finished 3-1, but although City seem to have sorted things on the pitch, Mario Balotelli is ensuring that peace and harmony will not permeate the walls of Eastlands for Christmas – the player is challenging the club’s decision to fine him for his poor disciplinary record last season, at a Premier League tribunal on Wednesday.

While Balotelli’s festive approach to arbitration will come as no surprise to anyone with even a passing interest in football, Liverpool’s capitulation to a resurgent Aston Villa might have. Christian Benteke scored two and set up Andreas Weimann’s strike in the 3-1 defeat – Steven Gerrard’s 87th minute header hardly a consolation for the home crowd. Prior to the game, manager Brendan Rodger’s claimed his team were aiming to finish second in the table, but then this had just happened to him, so he may well have still been a bit confused.

QPR were going to win a game eventually, but their Adel Taarabt inspired victory over Fulham couldn’t have come at worse time for the Cottagers – they are in the midst of a very dodgy run of form that has seen them slump to thirteenth position in the table. QPR are now off the bottom, but if Reading beat Arsenal at the Madjeski tonight, Harry Redknapp’s side will slip back down to twentieth. 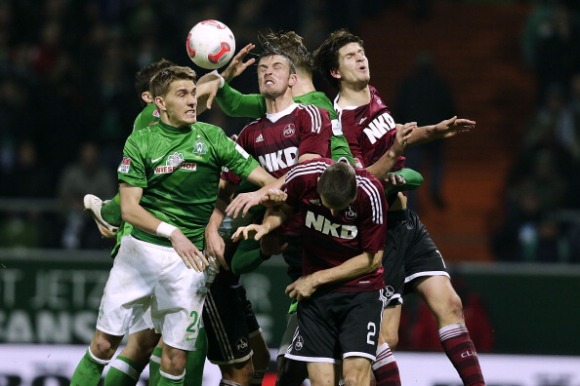 It all got a bit Rammstein at Werder Bremen. Neue Deutsche Härte, anyone? Image: Oliver Hardt/Bongarts/Getty Images.

It’s a little early for spring cleaning, but Schalke have set about a reorganisation program by sacking coach Huub Stevens after his side suffered a 3-1 home defeat to Freiburg, extending their winless run to six matches. The side are seventh in the table but seventeen points off the lead, a position they need to rectify quickly if they hope to come anywhere close to last year’s third place finish.

Speaking of which, last year’s league winner’s Borussia Dortmund are also going to have to make some changes if they harbour any hopes of catching up with Bayern Munich. They beat Hoffenheim 3-1, but have only won eight games out of seventeen, vs. Bayern’s thirteen. That said, Bayern did drop points at home to Borussia Monchengladbach, allowing Dortmund to narrow the gap slightly. They are now twelve points off the pace, with Bayer Leverkusen three points above them in second. Leverkusen beat Hamburg 3-0.

PSG’s shocking start to the season provoked all kinds of schadenfreude from neutrals eager to see the profligate Parisians struggle, but a 1-0 victory over closest rivals Lyon at the weekend completed their inexorable rise to the top of the table and we can’t help but wonder whether anyone is going to shift ’em. They might be level on points with Lyon and Marseille, who beat Toulouse 1-0, but they are substantially ahead on goal difference and surely only fools would bet against them still being there in May.

We haven’t, in case you’re wondering, but there’s still plenty of time.

Good news for Montpellier, who at least have an excuse for a poor start to the season. Their 4-0 win over Bastia propelled them into the top half of the table for the first time and they sit nine points off the pace alongside Valenciennnes and Lille, who lost 2-0 to Rennes and drew 1-1 with Reims respectively.